This post is part of a virtual book tour organized by Goddess Fish Promotions. B. Truly will be awarding a $10 Amazon or B/N GC to a randomly drawn winner via rafflecopter during the tour. Click on the tour banner to see the other stops on the tour. 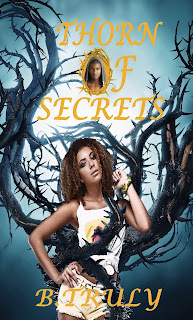 In love with the same face that haunts me….

The falling leaves of autumn are like the deceit in my family lineage. Closing the door on the infinite cold—winter blossoms into the spring of new beginnings. In the next season of my life, I’m mending the pieces back together. Opening myself up, I even begin to date, which is a big step for me.

After graduating from high school, a shocking development causes me to be on alert. When nothing comes of it, I move forward, wanting desperately to put the past behind me.

About to start college, I bump into someone from my complicated past, and my heart is torn. The dilemma I struggle with: Do I let other people’s opinion define who I am? I must decide if I’ll push through the ridicule and pave my own path. Could the face that’s scorned me be the key to my resolve? I’ll never know if I take the easy way out.

I’ve unlocked my darkest secret only to have it return to torment me. As the thorns of his obsession encompass me, I discover I’m part of a twisted ploy. If I don’t figure a way out of this predicament, then the life I’ve known may cease to exist.

Don’t miss the riveting sequel to Madison’s story that will have you dangling on the edge of your seat.

Tanya is screaming at the top of her lungs. I move closer to Justin, and he hugs me tightly. Did I think the wind was strong before? It was nothing compared to how mighty it is with the roof gone. All I can do is stare into the blackness of the torrent above us. I assume it’s similar to glimpsing into a black hole. The darkness whirls rapidly with specks of dark gray within its mass. The horrific rumbling emerging from the cyclone lets us know that it wants us to be terrified of its presence. It’s hard not to submit to the terror that’s threatening to consume me. The force of the wind causes us to lose our footing. My eyes grow large. This monster is going to suck us up whole.

“Grab onto something!” Justin shouts.

Jackson has the counter in a death grip, and Tanya is holding the toilet for dear life. Justin and I grab onto the towel rack—the only other bolted thing in the room. It’s nowhere near as sturdy as the counter or toilet, proving this by tearing from the wall. Both of us begin to lift from the ground.

This can’t be happening!

Using his strength, Justin pushes me toward Jackson. I can’t figure out his intentions until Jackson is holding me against him and Justin continues to lift in the air. Jackson is able to keep us grounded by clutching the counter. Poor Justin must suffer the consequences.

Reaching out, I grab hold of Justin’s arms. His body is literally dangling in the air—feet first. “Don’t let go!” I shout.

The strength of the wind yanks me and Jackson forward. I’m gripping Justin’s arms and Jackson is holding onto me. My grasp on Justin is slipping, and he grunts.

There’s not much Jackson can do. He’s holding onto the counter with one hand—me with the other. I wish Tanya would help us. Her entire body is curled over the toilet with her eyes squeezed shut. If she would only grab his other hand, we might have a chance.

She refuses to move or even acknowledge us—totally useless. The pressure from the fierce wind seems to be sucking the life from us. My hair is whipping all around my face. The toilet paper dispenser is ripped from the wall, then up, up, up, and away it goes. The doors to the cabinet come unhinged. All the items inside follow the same path—sucked up by the cyclone.

My grip on Justin falters. Panic sets in when I think of his fate. “I’m losing him!”

“Madison, it’s no use. Let me go before you’re taken with me.” Justin somehow manages to sound calm.

“I’m not letting you go. You’re too important to me. Don’t give up!” 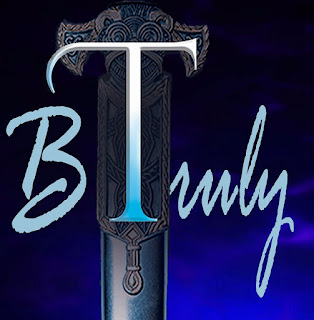 B. Truly has wanted to be an author since she was fifteen years old. She is grateful to have accomplished this dream. B. Truly has very vivid dreams and a wild imagination. She likes to read, watch tons of TV shows, and movies. She’s addicted to romance and gets a thrill out of suspense and sci-fi. She writes young adult, new adult, and adult romance, sci-fi, dystopian, and paranormal genres.

B. Truly likes to explore conflicted plots of romance with thrilling twists. She also loves creating impossible situations for her characters to grow from and try to overcome.

B. Truly has three wonderful children, and a husband who defines the person that she is today. She works full-time as an Ultrasound technologist in Houston, Texas.