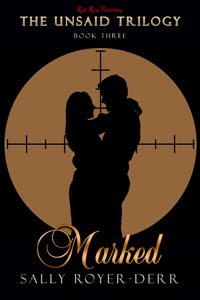 What I liked: My father’s eyes. The only thing he ever gave me.

He had the blood of a murderer flowing through his body and he often wondered if he too possessed murderous tendencies.

He strapped on his gun and walked out the door.

Cameron Brown is torn between avenging his father’s death and following his heart that beats beneath the life-long hatred for Danny and Amy Lopez. Cameron only met his father, the terrifying Alex Miller, once – and that was when Alex was in prison. Cameron cannot understand why he feels compelled to finish what Alex could not. Is it the only way Cameron can feel loved again since the loss of his mother?

In the third and final book of The Unsaid Trilogy, Marked, Sally Royer-Derr’s suspenseful tale promises more of the exciting twists readers enjoyed in the previous two volumes.

Conveniently, Cameron becomes a police officer and just as conveniently lands a job with the department where Danny Lopez works. Cameron can execute is plan by getting close enough to the Lopez family to destroy them. Until Emily Lopez, Amy’s daughter, ruins Cameron’s plans. And why is Marissa Blake, policewoman, so eager to help Cameron? Does Cameron share his father’s ability to overpower women and render them useful?

Unlike Alex, Cameron does not possess the same evil tendencies. Cameron knows he should, he must; hate the Lopez family with every ounce of his being. Cameron finds this difficult because he is actually falling in love with Emily. How can he hurt her and her family? How can he not?

Royer-Derr continues her story telling through her multi-dimensional characters and their strong loyalties. Each character must not only fight for what is right but must also decide whether the loyalties of the past are still important in the present.

Book blurb: Cameron Brown, Alex’s son, is intent on avenging his father’s death. His obsession with Captain Danny Lopez leads him into a career as a police detective working in Danny’s precinct. Cameron didn’t count on having doubts about his hatred of Danny. Or the romance he would find with Emily who is Danny and Amy’s daughter. His sights are marked to destroy the Lopez family, but will love change his mind?

Book excerpt: The tantalizing smells of Italian meats and cheeses filled the small neighborhood deli. Cameron Brown walked up to the greasy, white Formica counter to place his order.

“Hey, Officer Brown,” Joe, the owner of the deli, greeted him. “Hot today, isn’t it?” He wiped his perspiring forehead with his arm. “What’ll it be, the usual?”

“Yeah, Joe.” Cameron leaned his tall frame against the counter. He watched him assemble the large Italian sub, extra cheese and mayo, no onions. His dinner of choice, practically every night since he moved over the busy deli, four months ago.

He paid for the sub Joe handed him, wrapped in white deli paper, and proceeded up the narrow stairway in the back of the building. Opening the gray door of his tiny apartment, he walked inside and dropped the sandwich on the miniscule kitchen counter.

Cameron unbuttoned his shirt and laid his gun on the counter as well. What a day. Two murders, and a young boy was one of the victims. It had drained all the energy he had left. All he wanted to do was eat his food and sit in front of the TV. He grabbed a beer out of the fridge, took his sub, and sat down on the frayed, green sofa. Clicking the remote, he surfed through the channels until he found something mindless to watch. A rerun of The Office fit the bill. He laughed watching Michael Scott and the gang struggle through the day.

I wish I had problems like that, easily solved in thirty minutes. Cameron looked around the shabby apartment he inhabited. The same apartment his father called home for a few months, almost six years ago. Six years had passed since his father was killed and Cameron’s obsession with him grew every single year. When he got the job with the Reading Police Department, he knew he wanted to find and live in this apartment.

The only recollection he had of his father was in the jail visiting room at seven-years-old. Even though he denied Cameron was his son, Cameron could see in his eyes he knew it was the truth.

The son of a murderer. The title wasn’t easy to live with in the city where the most prominent murder took place. Cameron hoped to get to know Alex, his father, when he was released from jail. Maybe get to know another side of him. A side that cared he had a son in this world.

Cameron tossed the empty wrapper on the chipped coffee table. He mindlessly stared at the droning TV in front of him. Danny Lopez took care of any chance I may have had of getting to know my father. He would meet him soon, according to his plan, the man who watched his father take his last breath. The one who took his life.

SALES BLITZ: IF YOU LOVE ME