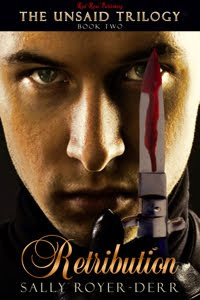 What I liked: “He’s going back to jail,” Amy said. She laid the knife down on the black granite kitchen counter.

I wish everything could stay exactly as it is today.

Amy Lopez believes that after 15 years she is safe and secure. Her solid and sizzling marriage to Danny Lopez has produced two beautiful children and the perfect loving home. But with her past in the form of Alex Miller about to hit her square in the face, literally and figuratively, again is Amy really safe or has she been lulled into a sense of false security?

If we had to face the most terrifying event in our lives, would we have what it takes to stand up for what we believe in? Could we sacrifice ourselves to save those nearest to us? Amy is the determined heroine who has to prepare for battle yet again and she will need to draw on every ounce of strength to do so.

In Retribution, the second gripping instalment of the Unsaid Trilogy author Sally Royer-Derr takes us further into Amy’s psychological journey. Unlike so many series that tend to be somewhat predictable, Royer-Derr’s Retribution throws some great twists into the plot to keep readers glued-and on their toes. Alex has an ally and has convinced everyone, save for Amy and Danny, that he is a new and improved man. Amy knows Alex for what he really is.

The tension is mounting between Amy and Alex, leading up to a showdown. But the stakes are higher this time. It is no longer just Amy against Alex because Alex is ready to strike out at anything and everything Amy loves. Alex is bent on destroying Amy’s happiness, her life, and every last family member if it is the last thing Alex does.

Let’s hope he meets his end before it’s too late.

Will Alex succeed in his hate-fuelled and rage-fed revenge quest? Will Amy finally be free of the evil force that has cast a shadow over her life? Retribution keeps us hooked to the end and prepares readers for the extraordinary events in the third and final book of the Unsaid Trilogy.

Book blurb: Alex is back and looking for revenge. His romance with the prison psychologist made him a free man, and once again his sights are set on Amy. The strong love Amy and Danny share continues to grow after fourteen years of marriage, but will Alex destroy their lives in his zealous quest for retribution?

Book excerpt: “This man has been convicted of murdering one woman, kidnapping and attempting to murder me,” Amy stated to the parole board in the dingy gray meeting room. “He should not be released into society. The potential violence he may inflict on another woman is too great.”

“Mrs. Lopez, I understand your concerns,” Melissa Cunningham nodded. “However, as the prison psychologist I have been seeing Mr. Miller for over ten years. It is my belief he is rehabilitated and no longer a threat to society. In fact, I feel he has reached a point where he can start contributing to society again.”

Amy struggled to keep her emotions in check listening to this ridiculous woman spout Alex’s miraculous recovery every time he was eligible for parole.

“Dr. Cunningham,” Amy demanded. “Are you saying you guarantee Mr. Miller will not harm another woman if he is released?”

“Thanks for the reassurance,” Amy retorted. Looking at the rest of the parole board she pleaded. “Mr. Miller is still a danger to me, my family and anybody else who gets in his way. He is a dangerous man, capable of just about anything. Please keep this in mind when making your decision.”

Amy walked back to her rigid folding chair next to Danny. He took her hand, holding it tightly as she stared at Dr. Cunningham, who still pled Alex’s impressive rehabilitation. A plain woman with no nonsense light blonde hair pulled away from her face and only a hint of makeup on her bumpy completion. She was thin, uncomfortably so, as her navy blue suit dwarfed her emaciated frame.

Despite her forgettable appearance her pale grey eyes blazed with passion and determination in her plea for Alex’s impending freedom, making Amy wonder how Alex could arouse such loyalty from a trained professional. Is it possible she sees a glimmer of a real person inside of Alex? Amy shook her head, knowing Alex only showed Dr. Cunningham what he wanted her to see.

SALES BLITZ: IF YOU LOVE ME